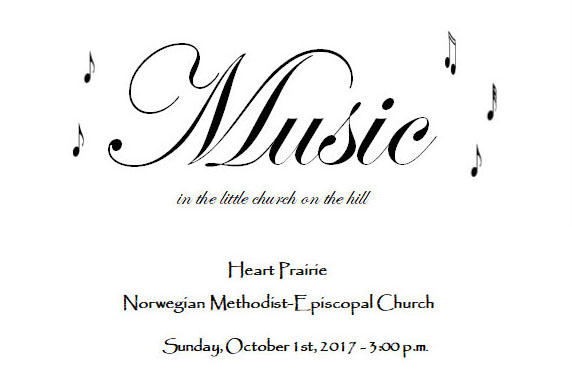 I want to thank everyone who attended the music program at the Heart Prairie Norwegian American Methodist-Episcopal Church on October 1st. We had a large turn-out with more than sixty people in attendance. It was a standing room only event. Fortunately, it was a beautiful day, so even those who decided to listen while outside the church were comfortable on that warm sunny fall afternoon.

For those who were unable to attend, the two performing musicians were the Reverend Larry Froemming and Lisa Bauer, my daughter. Reverend Froemming, played our 19th century Estey pump organ which was donated by Duane Austin of Beloit. The organ is much like the one used originally in the church.

The program began with the ringing of the church bell by Jonathan Kestol and Fox Bauer.

Rev. Froemming began the music program with Jesu, Joy of Man’s Desiring by Bach and Faith of Our Fathers by Faber.

Then Lisa, playing solo flute, followed with Dance of the Blessed Spirits by Gluck. 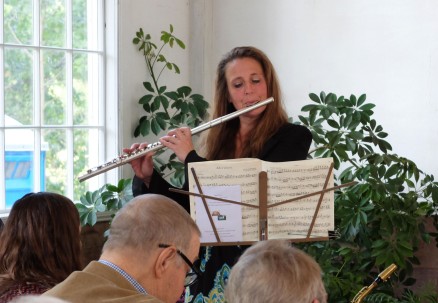 Reverend Froemming finished the first part of the music program with several numbers on the dulcimer. He explained that in the 19th century many church congregations lacked the money to purchase an organ, so they sometimes chose to purchase a dulcimer which cost much less but still provided instrumentation for the church music.

The video below features Reverend Froemming playing the dulcimer.

Although it was not listed on the program, I next asked my daughter, Lisa Bauer, to play a quick tune on the saxophone that belonged to Joseph Kestol, my uncle, who was the custodian of the cemetery for over fifty years. Joey Kestol was a farmer by profession, but he was also a good musician. He played saxophone in a number of bands in the area for many years, and he was a long time member of the Whitewater City Band. Here is a short video.

I next reported on the progress of the church restoration over the past year. The windows are now finished and special recognition goes to the families who donated the windows. They are the McIntyres, the Johnsons, the Browns, and the Fischers. One window, dedicated to the Steensons, was funded by community donations. The one original window is dedicated to the Kestols. Special thanks also go to Whitewater Glass Company for providing the glass for the window project.

The church now has several smaller items that should be mentioned. These include a prayer chair beautifully rebuilt and refinished by Jerry Kramer of Whitewater, a star built from the original church floorboards by Jim Holden of Elkhorn, rag rugs donated by Larry and Terri Yanke, a 19th century table/bench made by the grandfather of Flora Helling, and a new altar made from original boards of the church.

I also want to thank Evie McIntyre for all the landscaping she has done in front of the church, around the bell, and on the south side of the church. Tony and Janet Brown also deserve enormous thanks for clearing out the brush from behind the church. The plan is to make a wide path behind the church and cemetery so one can walk from one end of the cemetery to the other.

The following video includes most of my remarks for the church update.

After the church update, the music program continued with everyone singing the hymn, Spirit, Spirit of Gentleness accompanied by Reverend Froemming on the organ.

That was followed by a solo presentation of Lisa Bauer playing Massenet’s Meditation.

After a few closing remarks from me, the music program then concluded with Reverend Froemming’s wonderful performance of the Battle Hymn of the Republic.

Lisa Bauer continued to play outside as refreshments were served as people mingled. Several people took the self-guided tour of the cemetery. Refreshments included coffee, apple cider, fresh apples, and Norwegian cookies such as krumkake and sandbakkels. I want to give special thanks to Quednow’s Heirloom Apple Orchard for providing the apple cider for the event. There were numerous comments about how good it was.

Again, I want to thank all those who made this event possible, especially the musicians Lisa Bauer and Reverend Larry Froemming. Thanks go to Charles Cottle who printed the flyers and the programs. He also maintains the website. I am especially appreciative of everyone who has given donations to the church restoration. At this year’s program, you were kind enough to donate more than $1,200.00. That amount will be extremely helpful in the coming year as we plan to complete the interior painting in the church, build a railing for the altar, and build pews like those that existed originally. I hope you all can come next year to see the progress on these projects.

A Gallery of Photos from the Music Program

Members of the Audience

Members of the Audience 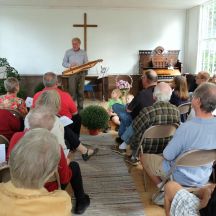 Reverend Froemming with the Dulcimer

People Leaving the Church after the Program 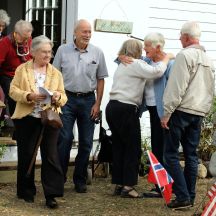 People Leaving the Church after the Program

Lisa Bauer Plays the Flute after the Program

The Bergers after the Program 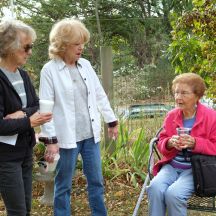 People Mingle after the Program

People Mingle after the Program